I’m Wayne Jenson, General Manager of Buckatree Hall Hotel, and this month myself and Team Leader Martin Vickers went back to school.

We entertained children from Lawley Primary School, Telford, baked cookies and watched an episode of the Furchester Hotel on CBeebies.

As a father-of-two I am an avid fan of the show, we all had great fun.

Martin was totally out of his comfort zone but did a fantastic job of both entertaining and educating the children. He also had his ’15 minutes of fame’ when he was interviewed by BBC Radio Shropshire – well done Martin!

I think the best testimonial I’ve heard was from Imogen telling her mum that “Eddie’s mum wasn’t at a meeting today she was at Butlins supervising!”

That shows how much fun they had – they thought we were Butlins!!!

Read the story in full HERE and HERE. 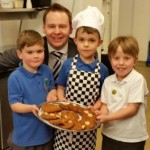