Following on from this month’s community minded project with Lawley Primary School we were delighted to be invited to meet Executive Producer of CBeebies, Tony Reed, and Funella Furchester from the programme The Furchester Hotel.

I’m Wayne Jenson, General Manager of Buckatree Hall Hotel, and of course, I was very excited to accept the invitation – before you could say Furchester Catastrophe I was gone!

My wife first told me about a new programme that was coming to CBeebies called the Furchester Hotel last year, I looked into it and thought it would be fun to start tweeting them, one hotel to another!

I even announced the opening a new hotel in one of our Chamber meetings! Nobody had a clue what I was talking about and most thought I was just plain crazy!

Several months later this is the end result and I am delighted that we have been able to bring this experience to the children of Lawley Primary School who also got to meet Funella and watch a brand new episode of the show.

It is exactly this type of event that brings communities together and Buckatree Hall is proud to be able to contribute, I am only disappointed that Martin, our Team Leader who enjoyed an episode of the show recently when the school children visited, missed out due to being on holiday.

The story made the local paper, see here:
SHROPSHIRE STAR 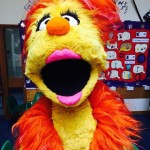