This week we were delighted to celebrate with Patsy LePennec & Jim Carty who got married here at Buckatree Hall Hotel.  Patsy and Jim live in Southampton but grew up locally and have family in Telford so Buckatree Hall was their first choice.

Following a great day’s celebration both bride and groom were ready to catch the train back to Southampton and begin their honeymoon, however, there was a problem.  How to get back home on the train with all their luggage, gifts and wedding cake?

They need not of worried as Team Leader Martin Vickers came to the rescue and offered to deliver the cake the following week when he too would be heading to Southampton to meet up with his brother.

Below are pictures before Martin set off and when he reunited the cake with Patsy’s sister as they were on honeymoon! Well done Martin. 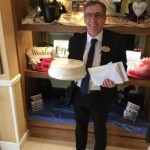 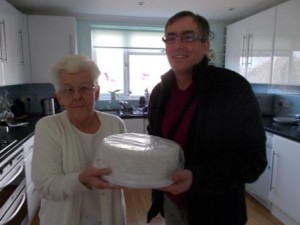